Islands holiday life is growing popular for its high tempo of summer party in Croatia. On island Rab party life is mostly happening in the town of Rab and here you’ll find nightclubs, bars, cafe’s. Excitement of the summer party you can also find at the beach party in the popular island party club Santos at Pudarica beach. Then the night clubs in Lopar like Bamboocho on the popular croatian beach Paradise in Lopar. As well as in San Antonio disco club in Rab close to the town port, or in the many bars in the old center of town. For those who prefer intimacy and romance, you can find your moments in numerous coffee bars along the narrow passages and promenades surrounding the historical part of town.. Operating as a cafe bar during the daytime and a nightclub after dark, the San Antonio concept provides variety of attractions including summer party, fashion shows and many other different performances that are most numerous during summer months. Popularity of the Club is enhanced by the appearances and live performances of well known artists and musicians. San Antonio Club is situated by the main port side the town of Rab.

Santos beach club, is of the beach party clubs on the island of Rab at beach Pudarica. Beach party club was opened during the summer months of 2004. It is an ideal place for the afternoon siesta or wild party adventures. As there is a volley course on the premises. Santos also offers a beach volley recreation as well as the afternoon lounging by the pool.
During the summer months you can enjoy different programs such as: beach volley tours, Croatian or foreign DJ’s. Then concerts, fashion shows, and different theme parties. The idea behind the opening of this type of beach club is to bring closer the party style of people in other parts of the world.

Zrce beach is a long white pebble party zone with nightclubs near Novalja on the neighboring Croatian island of Pag. It is a popular summer party scene hosting popular DJ-s and with clubs working 24/7, like the popular island party club Papaya. On the same beach Zrce there are also clubs like nightclub Aquarius and a huge new beach party club Noa. It is a sort of a Croatian Ibiza with all three of the mentioned clubs being among Top 100 nightclubs in the world ! Spring break on beach Zrce on island Pag is becoming more popular with it’s growing lineup of DJ’s and performers. Pag Croatia music festivals with top DJ’s in the world are some of the most visited festivals in Croatia.

For transport from Rab there is a 45 minute fast boat – catamaran ride every evening from the town of Rab going to Novalja on island Pag. Boat returns early next morning back to the main port of Rab. Catamaran tickets cost about 10 Eur per person each way. To go to Zrce beach where most of the largest nightclubs are there is a 10 minute drive from Novalja. Also there are shuttle buses that run all night long from center of Novalja to beach Zrce. In the town of Novalja one will also find a lively port with a large choice of restaurants. Also party life is rich in the town of Novalja along the port.

Rab party in July Rapska Fjera is one of the summer festivals in Croatia based on historical legacy of the locality. In 2002 it was again restored from municipal holidays proclaimed for the first time on 21 of July of summer 1364. It presents the highest value in nurturing and developing indigenous and traditional culture. Municipal summer holidays “Rabske Ferije” were declared by the Grand Council of the Town of Rab on 21.7.1364. Holidays were declared in honor of King Louis the Great who liberated Rab from Venice, and also in honor of St. Christopher, patron of the Town of Rab. Festivities were held in order to be able to worship St. Christopher, who according to the legend saved Rab.

Rab summer fair participants were craftsmen and artisans on the island of Rab, who were actively engaged in ensuring the livelihood and crafts that have existed and provided a living in the Middle Ages. Also cultural associations and clubs that are voluntarily engaged in traditional crafts and traditional values, and foster development of local products and way of life. Reclaimed ceremony “Rapska fjera” is now held in a shortened period of three days: 25.7. – St. James, 26.7. – St. Ann and 27.7. – St. Christopher. In a time between 21:00 to 00:30 hours daily. Festivities and events in the summer evenings of July include a procession through the streets of old town Rab. Shows and performances are organized by various groups in the medieval style, with crossbow competition, fireworks.

The significance, impact and meaning of Rapska Fjera was best so far described by the Croatian Academic Slobodan Novak in the preface to the catalog “Rabska fjera”. From there we chose the following quote:

“… On the contrary, very dignified ceremony, that was inaugurated six and a half centuries ago. And it’s not a great parade of worthless, but actually an expression of desire that, if only by intuition, penetrate the darkness of past centuries which are still recognizable shadows of our ancestors. To perceive their own roots, to confirm and reinforce their identity. That is to be able to, woven and bound by sophisticated modern technologies, recall the beauty of the hand, fingers and skill, the blisters instead of gloves, the predestined relationship with nature, with land and sea, the spiritual and material creativity of our ancestors. The individual creativity somewhat forgotten by the time of team work, running tape machine and garment.” 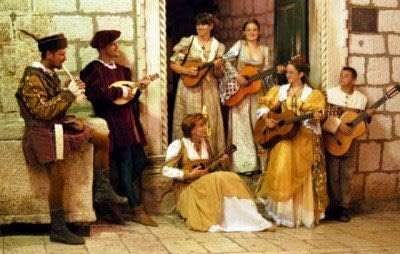 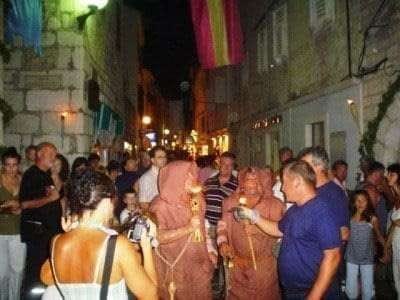 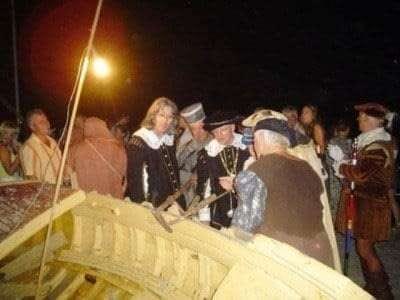 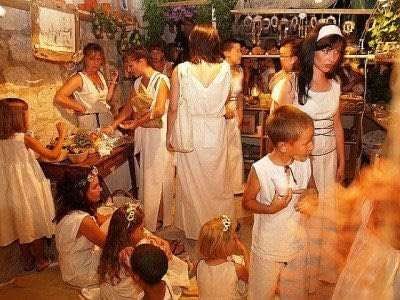 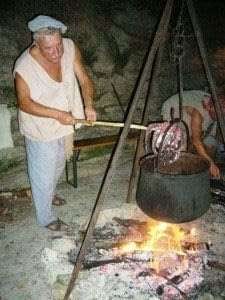 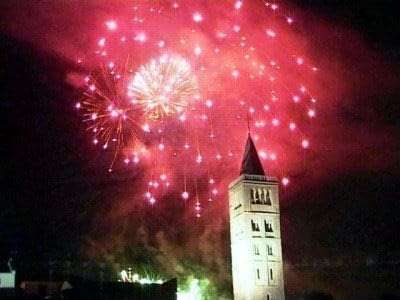 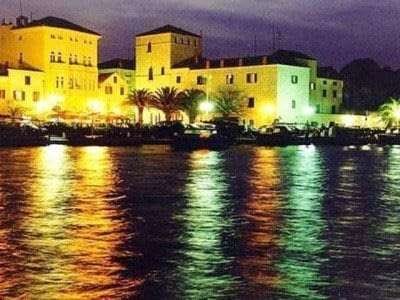 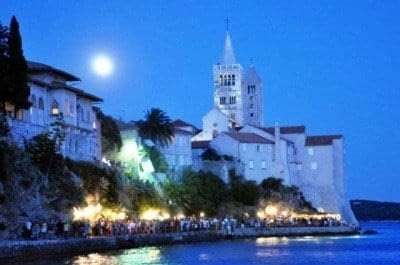 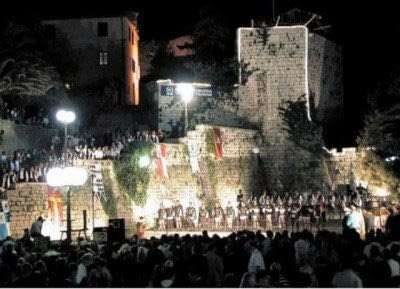 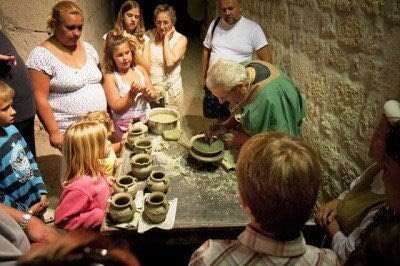 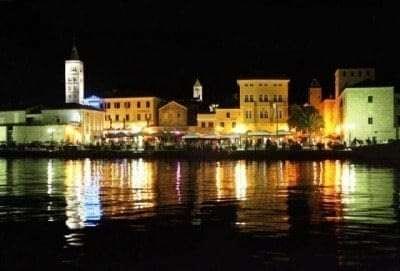 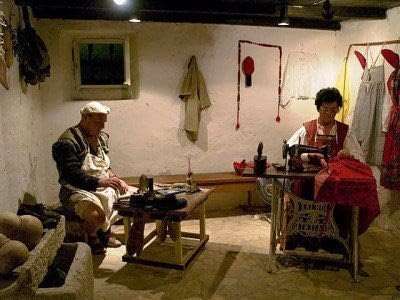 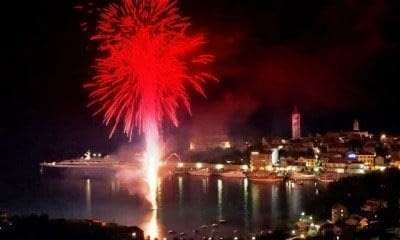 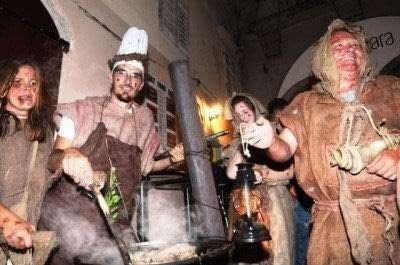 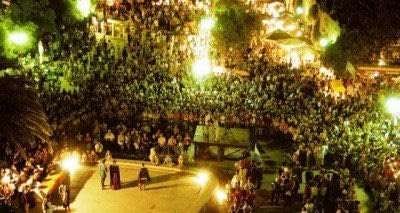 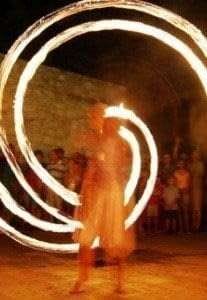 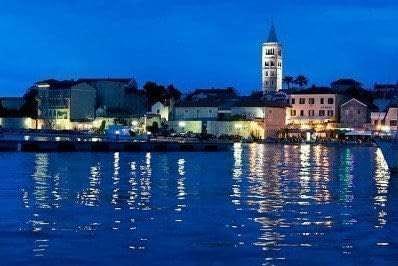 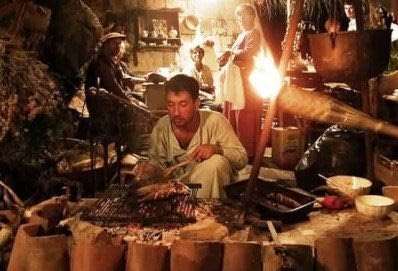 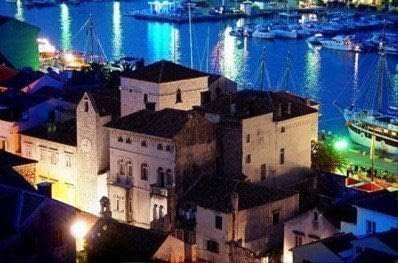 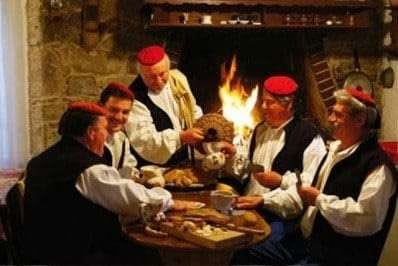 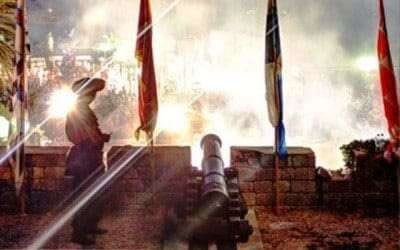 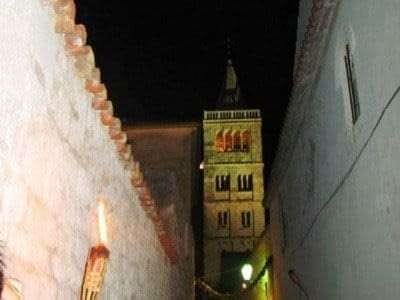 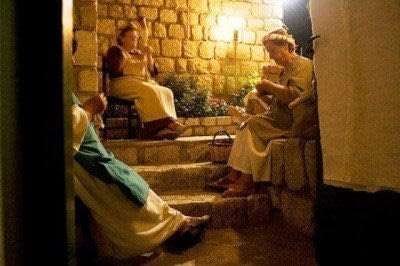 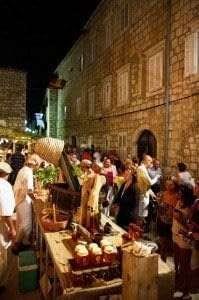 Croatian islands and the features of people and environment can be found in the local “pot” of island Rab. Abundance of sea and coastline, the barrenness of the rocky ground and of the hinterland, the wildness of the mountain, and the tameness of the valley. Instead of recommending what to taste, let’s just say that fish, crabs and shell come from the clear sea, vegetables and fruit grow on unpolluted soil and that lambs and game breathe fresh air. Healthy food is served in a restaurants here. Island food menu of a typical restaurant is predominantly seafood oriented, going well with the sea ambiance. Many restaurants pride with the fact that the owners are themselves fisherman or are provided first-hand. Same goes for the locally grown vegetables.
In order to get a more complete idea of the natural alimentary wealth that gave the regional cuisine its origins, we must make a distinction between coastal and mountain cuisine, their differences being attributed to natural and geographical conditions.

Croatian islands food, owing to its influences is based on fish, shellfish and squid, on lamb and wine. Then pasta, vegetables, fruit and herbs, olives and olive oil. While the mountain cuisine is based on game, milk and cheese, meat and mushrooms, freshwater fish, vegetables-potatoes or cabbage in particular-wild fruits and spices. As well as on strong drinks, brandy, juniper and honey brandy.
In addition to the distinction between coastal and mountain cuisine, different methods of food preparation and recipes are also found in the micro-regions themselves. Each island, even each village, has its own meals, food ingredients and recipes.

While you are in Kvarner region do not miss a taste of either the island cheese (“paski sir” of Island Pag). Or the mountain cheese (“skripavac”), the smoked ham (“prsut”), green or black olives, lamb (roasted, or cooked under a baking lid: “pod pekom”), octopus salad and the local fish stew (“brodet”), shellfish and octopus, the well known “scampi”, grouper and venison, asparagus and mushrooms, the typical pasta “surlice” and gnocchi, and fritters (“fritule”).

Some of the typical Croatian food specialties on Rab: ↑
Manage Cookie Consent
To provide the best experiences, we use technologies like cookies to store and/or access device information. Consenting to these technologies will allow us to process data such as browsing behavior or unique IDs on this site. Not consenting or withdrawing consent, may adversely affect certain features and functions.
Manage options Manage services Manage vendors Read more about these purposes
View preferences
{title} {title} {title}